Oooh, last post from Japan (but I still ended up completing it only in Taiwan). After these couple of weeks here, I have stopped labelling it the Land of Onsens~ but rather, the Land of Vending Machines. 😀 I bought my last iced black coffee from it, enjoying the clingclingcling sound of loose change and the clongclongclong sound of my aluminium can.

Today’s Ragtag Daily Prompt is Shaken because of the multiple meanings I suddenly realise it holds. I was caught in the Osaka earthquake yesterday, causing me to miss my flight but I was lucky enough to grab a seat on today’s flight (full flight, and I got the last seat on the plane 🙂 ). Dingding~ #1 shaken ground = earthquake. I did not feel any tremor though, since I was on the train.

I was a little shaken when everyone’s phones on the train rang at the same time. I thought all our phones got hacked! Errrrm, first world problems, tsk. But no, it was an emergency notification. Pretty exciting time (?!), I also realised one fortunate thing: it is that I can read enough Japanese to save my life. Dingding~ #2 shaken emotionally = discomposed. Nah, I wasn’t exactly shaken emotionally, I was more shocked because I have never experienced an earthquake in such close proximity and in real-time before. 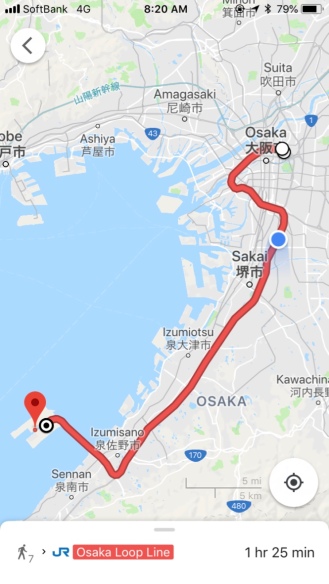 My view of social/cultural behaviour during disasters was also shaken. Dingding~ #3 shaken = thrown off balance. I would imagine there be anxiety, but no not at all, everyone was calm and just hung around doing their own thing. Until twenty minutes later, some people started heading out to the next carriages, I assumed due to the public announcement that I did not understand. I followed a Japanese guy who was helping out three other Taiwanese ladies who were taking the same flight as me! They look visibly shaken. We tried hailing a cab from the main street but to no avail. Maybe I am a different generation, and also a practical realist who generates possibilities and risks at the back of my mind while trying to physically flag down the taxi. We headed back to the train station, and an available cab came right by. They left on that cab, but I didn’t – the very Useful Mind was calculating all sorts of possibilities in the background and I was convinced that there is no point rushing only to be late and still miss the flight. They managed to catch it, I think, I didn’t see them on this morning’s flight, plus the one I missed was in fact delayed. I was also a scaredycat with wits about that of a city planner, and I was feeling iffy about roads in such circumstance. The national rail was out of action, and highways were closed, so I would rather stay put and see what happens.

My stellar brother asked me to share my story with the local Singapore news. He and sis deal with the media quite a bit so it is like some normal thing to do (almost) but I am a little too shy for that. I will just blog it here like a diary with all sorts of boring details. 😀 We had our good family laugh about it over WeChat, which was like my centre source of guidance yesterday.

I don’t have sensational news for anyone. We just walked to the other end of the train which happened to have a couple of carriages still on the platform. Tried to chat up the station master, but apparently they did not have any information to offer (up till this morning, the JR lines were still down). It is all still, centred, calm, and zen like the temples I visited. It was also a literal picnic in the park, except that it’s in a train station. The station staff put up canvases on the ground as mats and everyone just sat down and waited. I am serious, it was like watching a screensaver of water dropping down an hourglass – absolutely zen. I got bored after a while and disappeared to enjoy a yasai curry set lunch 🙂 🙂 and also to charge my phone. When I got back, the students at the station were already sprawled out on the mats and taking their naps. 😀 What a sight. Cheekybro sent me our local news article about the picnic in the park, as I have described, except that the writer managed to add a lot more excitement to it. 😀

Anyhow, it was a very interesting experience, and now I have a vague idea of what to do in an emergency situation. Bro spent the morning directing me what to do administratively, while sis was checking out the Japanese news to keep me updated (I was creeped out by western media), and Dad was stalking our conversation while at the same time taking photos of what he’s watching on the tv news (scary footages). Colleagues were helping me find the next best route out, because my usual bimbotic response was always “not sure, I’ll just wait for the JR to be back up and running”. I am pretty glad I didn’t! It took me another half a day to finally get to the airport hotel. I also realised that if we keep ourselves within a hole, that will be what we see; while the world may have already moved on outside the hole (the other local metro systems were already up and running).

I also now understand the fuller meaning of what “safe travels” mean as a greeting.