Embarking on the momentum of one stone throwing at two birds one month in advance. Guess it’s time to start practicing. 😀 Bird #1: Memories; Bird #2: Quarry. I have been very impressed by a few who have been doing word prompt home-runs, but I doubt I have that many lines to connect so many dots.

I managed to dig up my stack of CD-Roms from my Melbourne days! More like, Dad managed to find them. It has been a weekend of deep-mining for super duper old things so I can start on my upcoming new project. That is also what makes me nervous, because I now have to revisit things that I had abandoned when I jumped ship to a more worldly humanitarian field. This is really Universe showing me the whole theory about the meandering journey through life I blogged about, and now making me immerse in the experiential aspect of it. Dad was very amused, and we were lamenting how that was probably why I never threw all those things away even though I was so sure they are useless by now. I have yet to find the very piece of paper I was searching for, but will dig again later tonight.

Information is useless if we have no tool to read it. My only device with a CD-reader (is that what it’s called?) is all the way in the Philippines. All the other apples have no slit/slot in them, so … here I have a stack of info … and I can only stare at them with my powerless eyes.

I was going to write about Sovereign Hill, and I remember having so many pictures inside! It is this gold mine museum in Ballarat and we visited it on our way to the Grampians. Dad and Mom came over for my graduation and a month of holiday, so we went around regional Victoria during the weekends, and they make train trips to different suburbs everyday while I was busy at school or at work. School was a little complicated, as I was rather undecided (and pretty multi-talented! hah!) hence I was criss-crossing between different degrees, and ended up attending graduation while I was still in the middle of some other degree. Work was like my escape when things got a little too intense with the sudden presence of two Asian parents hawk-eyed over me after two years of freedom.

So, metaphorically, there’s a whole quarry of memories in this physical stack of flat circles in front of me. On the other hand, I really want to write about my memories of the gold quarry! It was so fun! It is a disused goldmine no longer functioning, but now a very educational museum on the history of the Australia gold rush. The town is kept as it was, so we could see the scale and the way of life, and they also featured social issues faced by the population then. There was even a performance where the town suddenly came alive with people in period costumes! It really caught us by surprise. I did not do any homework about what we’re in for, but merely going there to check out the urban scale and the technical background of the mining industry. Watching people shout and chase one another around town in funny clothes really got us in tickles.

We also visited the mine itself, and had a little ride in the little cargo tracks. There was a whole introduction about how to look for what type of mines, the kind of veins to look out for, because chemistry gives us clues on what ultimately forms inside the whole chunk of rockface. They also showcased the techniques of mine exploration and the methods of structural reinforcements, which totally blew the minds of us two geeky peeps. Mom’s usual attention went into how it must have been a really tough life for the miners – having to be in such a tiny enclosed space for such a long period of time, so little to eat, exposed to dampness and dust, etc. It is pretty obvious I am a product of these two people combined.

Fun things we engaged in was in the actual sifting for gold nuggets along the river. Hahaha. I am so sure the photo is in that stack of CDs. All I could find was sand, and sand and sand. The water was crystal clear, although a little on the cold side, so I did not really mind all that sillybilly act of pretending to look for gold.

There was also one very brief incident of not-so-nice stuff when we were getting out of the car. It was my first and only experience with outright racism when some kid shouted at us to go back to our own country. I was not upset at all, but more bemused and maybe more concerned that my parents would feel hurt or something. It was more like a “huh?” moment, and then a long pause of “really????” when we blanked out for a while unsure whether that was really happening, and then we were back to doing our own things.

Will post the fun pics after I crack open that stack of disks. 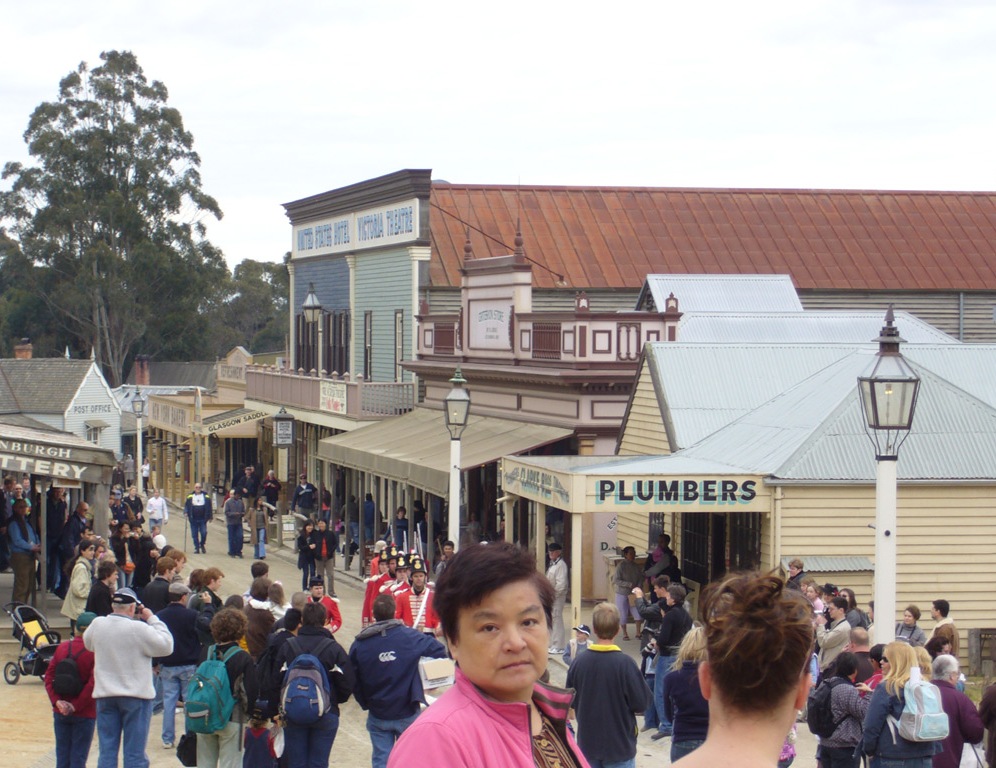 Oblivious to troops behind

Meat for you, Mdm?

Panning for gold in the cold 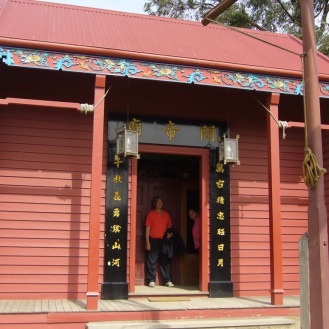