Why are abbeys always built into such breathtaking naturalistic elements? The first that took my breath away was Montserrat that sat hidden in the mountains off Barcelona. That was also the first time I attended mass with dad! (And possibly his first time attending mass!) Thereafter, my trips in Europe were “pilgrimages” to the grandeur of all the La Catedrals in every city I visit. I did not think there would be another one that can take my breath away, after having wow-ed and drool-ed at soooooo many of them.

But today, on a very fine Whit Sunday, I trotted down to the island in the bay between Bretagne and Normandie. I cannot tell where the borderline is, it is just a fluid mergence of the beach, the sea, verdant farmland and blue skies of rolling clouds.

The walk from the bus stop to the island was 3.5km longgggg (and I forgot to wear my Fitbit today). I am really glad they have decided to move the entrance further out from this UNESCO site. Not just because of the material protection of the relic, but also the preparation and the buildup of the sense of reverence from the slow long walk in. There are alternative transport such as shuttle buses (hopefully electric…..) and …. horse carriages! 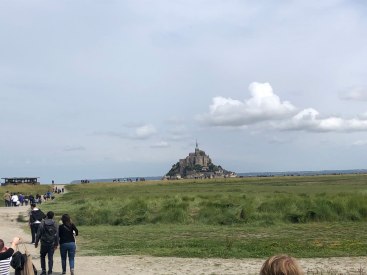 Walking meditation it was! I was enjoying the majestic panoramic views of openness with the Mont Saint Michel as the central focal point. No other buildings, but the elements of Mother Nature. I was lucky to be walking over when the skies were blue! My return trip was a little grey, and it was raining by the time I got onto the bus.

The visitors span a large spectrum of demographics – children, adults, many old people, groups, couples, families, some with dogs. All sorts of languages too! I am getting a little too used to Frenchies saying yes, “Oui. Oui oui oui. Ah oui, ah oui.” Very cutesy and soothing sounds, like they are whistling, or mouthing their whistles. 😀 One similarity across all groups is that everyone was clinging onto their windbreaker on the way in. By the time we were at the base of the monastery (about halfway up the mont), most people have taken their big jackets off. By the time I made my way back, most people were already in just tees or even sleeveless tops. And holding a bottle of water in their hands!

I bought a little gold figurine of Archangel Michael, as I was totally in awe of the glittering bold figure sculpture at the top of the abbey, but did not have a chance to admire it in detail. It glitters so beautifully in the sun, catching my eye the entire long walk in. Now on hindsight, I really appreciate the Sevilla Cathedral having lowered the statue of Giraldillo to its entrance where we get to admire it.

On another note, I do have my mortal questions too, which I shall ask Google when I wake up tomorrow. Like, if he is an arch angel, why is he a saint? I thought saints are mortal beings like us, with flesh and blood. Hmmmm.