Alright, now to the main city and the main point of the trip – for work in Paris. I find that the marginal utility theory works here too: as I make more trips there, the enjoyment I get from it diminishes. By this trip, it was almost painfully just a work trip. I would say it was my own choice though: I kept it to as short as I possibly could (because my threshold for negativities is decreasing, and I do not see why I should put up with any more than two weeks of it). Previously, it was always a whole month, so I could just enjoy strolling down the streets at the end of the work day, and then strolling to the markets or to some artist house over the weekend. This time, every evening was an urban hike past the crowd along the dusty roads, almost 2km. It was the same in the morning, but it was not as dusty in the morning.

The two weeks were split into many different parts. Basically we reached France on a Whit Saturday/Sunday/Monday weekend and it was pointless going to work. Hence the trip to Rennes, Bretagne – easy convenient destination with enough sights and enough tranquility. Then it was back to office, and my mini-me joined Part 1 of Paris! Then it was off to Berlin for a meeting (and sightseeing along the way, literally), and then back to Paris for Part 2. By the weekend, we had a friend join from Catalunya, and spent the weekend at a colleague’s place in suburban Paris before heading back to Singapore.

Yes, limit the time in Paris. It is expensive and it is dusty. Okay, better start writing about happier things before I turn into an old broken record.

So! My Mini Me joined me in Paris! She interned for us for abit before venturing to London to study. She finished her exams and air tickets were cheap (I was shocked when she told me the price …) so she flew over and bunked in with me. She is my niece (gasp!) and family has always likened her to me, and her elder sis to my elder sis, and her younger bro to my younger bro. It is pretty endearing. Her dad once told me, “hey, I was just looking at your photos”, and I was pretty puzzled until he showed me the pics of her and their family. “Doesn’t she look exactly like you?” 😀 😀 I am flattered. 😀 😀 She is really cute and loveable. Everyone is office loves her because she is so nice and sweet. 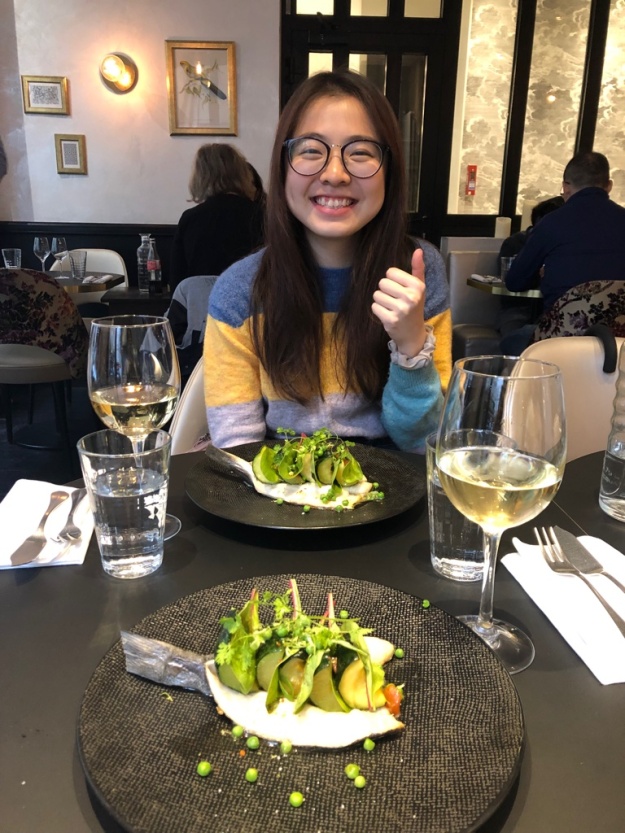 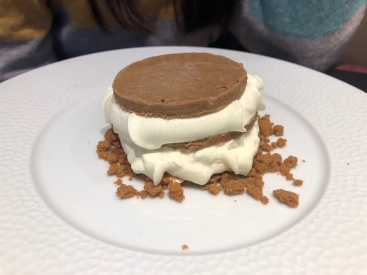 Our two best dinners were with her. We splurged on these two dinners because she is such good company, and we wanted to give this young lady a good experience in this city for the first time. We had a good laugh too, because I am totally unabashed about my poor French pronunciation, and I am terrible at pretence. This restaurant was really good, with great service staff. The first night we went, they were having a private event, so the guy said, “hope to see you tomorrow night”. So of course, we went back there “tomorrow night” and they remembered! There was this snotty waiter (my feeling is he was trying to pretend to be snotty.. haha) serving our table, and his actions were really theatrical and two of us were already trying so hard to contain our giggles. THEN, when it came to dessert, I read out my order in phonetic English, and gosh, you should see his face! He was trying so hard to keep a straight face, but you can see a smirk almost breaking out through it. We broke into our giggles after he left with our orders. When dessert was served, it was someone else – the guy who spoke to us the night before. And he calmly read out the names of our desserts in impeccable French. HAHAHAHA. It was hilarious.

So in the day time while we were slogging in office, she headed off to visit all the touristy spots. Youths really have bountiful energy. She walked both days and said she was not tired at all. I was like that the first trip to Paris, but had to end my day by 4pm. Now I can understand how I really have to slow down when backpacking with dad. (My sis has realised this during their recent Bandung trip, and is going to fix just one focal point a day followed by lots of chilling for the upcoming Taipei trip.)

The rest of Paris is just about work. Everyday, we walk far far far away to office, and I would have my nose up in the air – to avoid the dust and to admire the sculptures on the roofs and the roofscapes of the Parisian urbanism. Everyday, we pass by the French Press, which means we have finally reached our office just around the corner. I would imagine what goes on in there – lines and lines of production, with a row of robots continuously pumping the French Press at a certain frequency. 😀 😀 Maybe that is not too far from the truth, I am sure journalists need tonnes of coffee to keep them writing. 😀 Client meetings were fun too – either the meeting venue is cool to the max, or the eating venue is classy to the max. ❤

Such a change of tone from my last two trips, when I used to blog much lovelier things. 😮 I hardly got to eat much salad this time (previous trip was salad every lunch and I was so filled with joy and bliss). I have to end this post with some food pics to make me feel better about life. Shakshuka is what I had for breakfast everyday! The waiters remember my order (specifically no eggs), and I found out why only when I got back. This dish is the middle eastern version of tomato and eggs. It is really yummy even without eggs! First day, I had it with croissant; second day, I had it with pain au chocolate; third day, they served it with a steamy pita in a pretty cloth bag! The photo on the right was one of the rare meals when food is not served with potatoes! I had potato overdose – mashed, boiled, whole, sliced, fried, fries – all sorts with all meals. I skipped many dinners because my stomach was filled with potatoes that hold space all the way till it was time for Shakshuka. 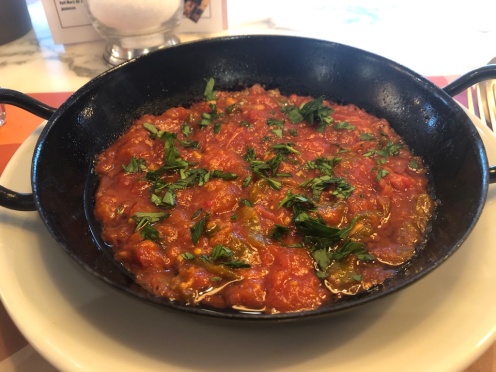